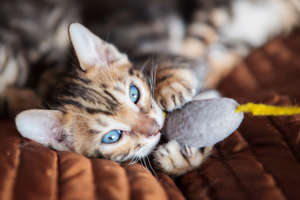 A stock image of a kitten playing with a toy mouse. A video of a cat's secret stash of toys and other objects being discovered by her owners has gone viral on TikTok.

A video of a kitten's secret stash of toys and other objects being uncovered by her owners has gone viral on TikTok, where it has received 1.5 million views.

The clip, shared by TikTok user @saratangg8, shows an array of different items sprawled on the floor in front of the door of a storage closet.

A cat hovers over the spread as a person is seen grabbing each of the items, which include "a bracelet, all the hair ties, the toys..." as well as a tiny tube of lotion and some small items used for a dish drying rack that appeared to have teeth marks on them.

The video was posted with the caption: "It was practically Christmas morning for her."

In a later comment, the poster said: "I found another stash underneath my dresser too. All the plastic lids."

The various objects seen in the cat's secret collection may be down to feline's roots as hunters, veterinarians explain.

In an article for VCA, one of North America's largest animal hospital chains, veterinarians Debra Horwitz, Gary Landsberg and Theresa DePorter said: "Cats are natural hunters, so their toys will be most interesting if they are the size and texture of prey, if they can be moved around in such a way as to represent small prey (mice, insects, lizards, birds), or if they contain tasty food or treats."

In another VCA article, Horwitz and Landsberg said cats like to be able to pick their toys up, so smaller objects tend to be more attractive than larger ones. It's often toys that offer unpredictable and rapid movement as well as a high-pitched sound that are likely to provide your cat with "hours of entertainment," they added.

Horwitz, Landsberg and DePorter also advised: "It is important to keep in mind that some pets may have aggressive chew strength and could potentially ingest bone or toy material. Pets should be monitored and supervised, at least initially, with all toys. If a pet will chew off pieces of a product, then this product is not recommended for them."

The latest viral video has left TikTokers in stitches.

User litnora wrote: "Hey you leave her trinkets alone," to which the original poster replied: "She cannot reach them once they've gone under the door y'all. It's inaccessible to her and my other cats love these toys too so it had to be done."

Samuel Sternberg agreed, noting: "The panic she was experiencing thinking she just lost all her treasures."

User thepuphut said: "Look at her panicking because you're touching it all," while user @icantthinkofagoodname said: "She's so stressed out."

User qwerty1.76 wrote: "That is a diverse collection. Well done, gato [the Spanish word for cat]!

Newsweek has contacted the original poster for comment. This video has not been independently verified.

Do you have funny and adorable videos or pictures of your pet you want to share? Send them to [email protected] with some details about your best friend and they could appear in our Pet of the Week lineup.